I’ve been promising a series on a concept that has changed my life more than even The Game did.

I’m going to slowly walk you into it, because every single person in the Inner Circle can benefit from this.

However, not everyone is ready to hear it.

What we’re going to be talking about has such strong defense mechanisms holding it in place that a certain percentage of people–especially those who need this information the most—-are going to dismiss parts of this series as not pertinent to them.

Do so at your own peril. 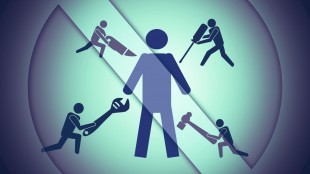 According to one model of neuro-linguistic programming, there are six levels at which we can learn and change.

1. The outermost level is Environment.

I remember, for example, preparing to go to college, feeling like I’d have a fresh start on my social life and a chance to finally be cool.

You got it: I still wasn’t cool. I was still me.

2. Going one level deeper, there are Behaviors.

A lot of The Game is based on behaviors.

If you change what you’re doing, you’ll usually get different results.

These are not just the skills you possess, but also how you use your brain.

So changing some behaviors may not be possible if you don’t possess the capability to do it.

4. Even deeper, there are Beliefs.

This is what is known as “inner game.”

And more than anything, it is beliefs that drive success–in dating, in relationships, in careers, in life, and, most importantly, in happiness and life satisfaction.

This is about who we are (or who we believe ourselves to be).

As one of my favorite NLP pioneers Robert Dilts puts it:

“It is our perception of our identity that organizes our beliefs, capabilities and behaviors into a single system.”

6. Finally, at the deepest level is Spirituality.

This is how we see ourselves fitting into the bigger picture of the universe.

If our body is a system, then this is the system that we believe our body to be a part of.

Now, here’s the cool thing about these Levels of Change:

If you change at the outermost level, generally little else changes.

But if you change at the deeper levels, typically everything above it changes as well.

If your beliefs about yourself become more positive, then your capabilities will increase, your behaviors will shift, and you’ll surround yourself with more positive people.

(No one broke any Olympic records by believing, deep down, that they couldn’t do it.)

Most people spend a lot of time trying to change their behaviors, because it seems quicker and seems more effective.

Changing beliefs, on the other hand, seems like a long, slow, and at times impossible process.

But let’s challenge that:

Look at The Game.

It seems easy to change behaviors.

For example: If you stand up straight when approaching, turn your body at a 45 degree angle, and rock on your back foot as if you’re about to leave, then you will have better results when you start a conversation with a stranger.

Most people can master that in no time at all.

But let’s not forget how MANY behavioral changes there were to learn to actually master The Game itself.

But what if, instead, I worked solely on my beliefs?

What would have happened then?

I wouldn’t have had to fake non-neediness, because I actually wouldn’t be needy.

I wouldn’t have had to demonstrate value, because I’d be demonstrating value simply by existing.

I wouldn’t have had to seek approval, because I’d approve of myself.

I wouldn’t have had to try to be like someone else, because I’d know I was enough as I was.

And I wouldn’t have been so fixated on every outcome, because I’d have a sense of abundance instead of scarcity in my life.

So I could have bypassed all those tactics and techniques completely.

But how do you find and change your own beliefs, and doesn’t it seem dangerous to mess with our identity?

And how exactly did those things get there in the first place?

I will try my best to answer these questions in the following emails.

I say “try,” because beliefs are stubborn creatures.

They hide deep inside your mind, buried so deep that sometimes you can’t even find them.

And if you spot them for a brief moment, they often slip away and hide again.

And even if you do manage to catch them, then what?

Is being aware of a belief enough to change it?

This is just the start. In the next post, prepare to deep-dive into the inner recesses of your mind.