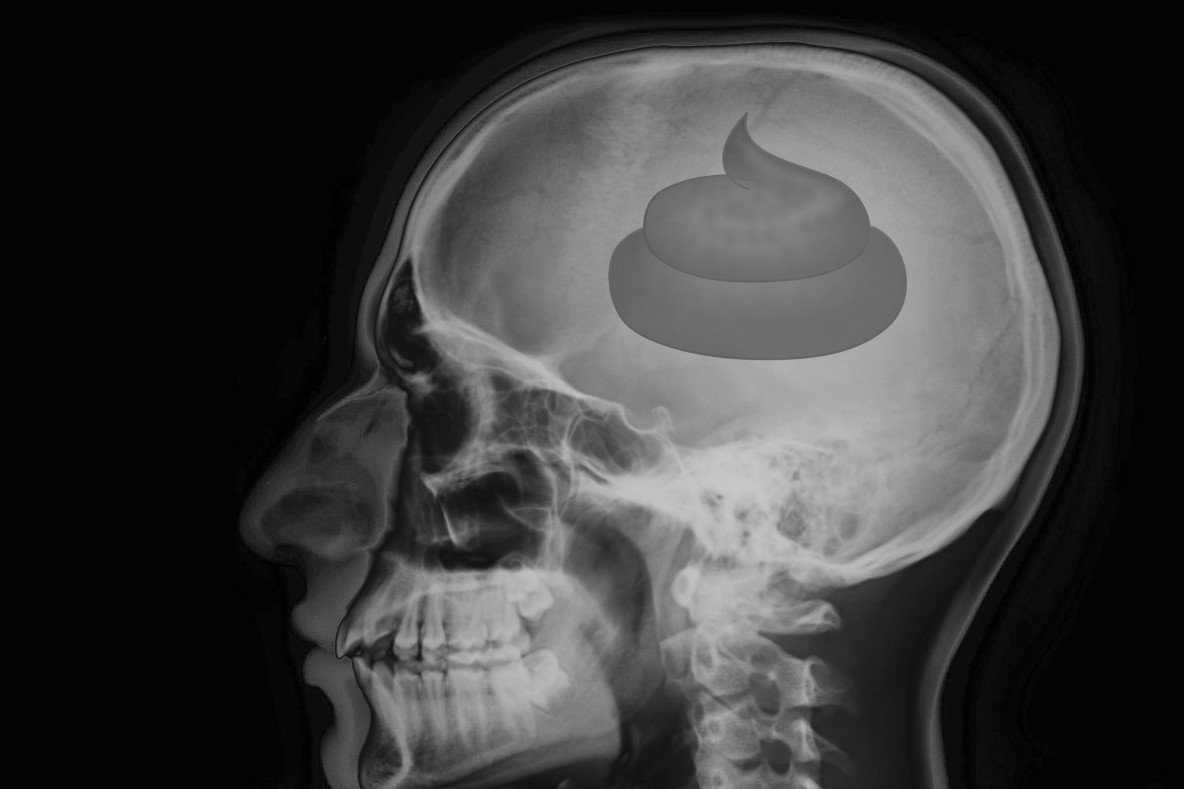 Stop for a moment.

Take a look at yourself.

You are going to look for something very specific.

Something that is hard for you to see but easy for almost everyone else to see.

It is a Big Bag of Shit.

Chances are very high that you are carrying one around.

And every time you encounter a situation in which you can possibly get more shit to put in the bag, you grab it and greedily stuff it inside.

If you’re like most people, you may even ignore all the diamonds glittering nearby, because all you can see is the shit.

This shit is composed of lies. And the worst part about them is not that they are lies about ourselves, but that we actually believe them.

Are you carrying a Big Bag of Shit around everywhere you go?

Recognizing the shit you’re carrying around, emptying the bag, and then refusing to take any more shit will make your life a whole lot easier and happier.

People around you will appreciate it as well. Especially those you date or marry.

So let’s get more specific:

Not intentionally per se, but not necessarily for your benefit either.

It happened in your first seventeen or so years of life.

Your parents, and other important figures in your early life, had certain beliefs, expectations, flaws, and methods of raising you.

And because you grew up with them—and much of the architecture of your brain was literally built through your interactions with them—your childhood may have seemed completely normal at the time.

But it wasn’t. Because let’s face it, no one is perfect and no one is normal. We are all uniquely flawed individuals.

“Let’s face it, no one is perfect and no one is normal. We are all uniquely flawed individuals.”

And so certain beliefs were literally wired into your brain. These beliefs are completely false. Yet unless you recognize them, and actively intervene, they get stronger each year.

And nearly everyone is walking around with them. They are responsible for fights, failures, divorces, suicides, wars, and a whole lot of insecurity and disappointment.

Seems fair enough. After all, they want you to go to a good college and be successful. It’s in your best interest to get good grades.

However, what is the collateral damage of this type of child-rearing? It’s that you will start to think that your self-worth depends entirely on your accomplishments and performance.

So the belief that it leads to will be: “I am not enough as I am.” And maybe even a corollary to that: “I need to achieve to be worthy of love.”

So in this particular instance, here’s one way this bag of shit operates. Someone may criticize something you did, and say you did it badly. And that may be true. But instead of hearing “You did that badly. You can do it better next time,” you hear “I am bad. I am a bad person.” And because the comment will feel hurtful instead of honest, and will trigger your own deep sense of shame, you will over-react far out of proportion to the comment. And that will strengthen the belief.

You may even ignore all the compliments that people give you and all the good things that happen to you, and focus only on the 1 in 100 times that something in the universe seems to reinforce this false belief.

Of course, many other early experiences could lead to this same belief of “I am not enough.” A parent abandoning you or the family when you were very young might lead you to believe that it was a personal rejection, and this very big bag of shit could lead to you squandering your life trying to win the approval of others (typically of the same sex as the abandoning parent) as an adult.

Now let’s flip this around: Let’s say your parents were very protective of you. To them, you were the greatest thing ever, no matter what you did. If you got bad grades, they marched right to that school and tried to get the teacher fired for being unfair to you.

What belief could this lead to?

“I can do no wrong.” And a possible corollary, “Whatever happens is somebody else’s fault.”

And so as an adult, you may charge through life, leaving a trail of blame in your wake. You are always the victim of someone else or something else. And so if you slack off at work and get fired, the boss was a jerk. If you go out on a date and it doesn’t work out, the other person was a “tool” or a “bitch” or an “asshole” or “not good enough” for you.

Side Note: It’s tragic to watch when an “I am not enough” person gets in a relationship with an “I can do no wrong” person. They both keep shoveling more shit into each other’s sack, with the “I can do no wrong” person blaming everything on the “I am not enough” person, who keeps believing each accusation to be true until they plummet to a self-esteem pit so dangerously low that either they become a shell of who they once were or they finally wake up, get away, and start therapy.

“There are, broadly speaking, two types of shit that people are carrying around.”

If you haven’t figured it out yet, there are, broadly speaking, two types of shit that people are carrying around.

The first is negative beliefs about themselves. These include a whole array of limiting and false unconscious thoughts besides what’s been discussed above, such as:

“If people knew the real me, they wouldn’t like me”

“I am not worthy of good things happening to me.”

In short, they are any belief that makes you feel inferior to others.

The second category is negative or “entitled” beliefs about others. These include such subconscious thoughts as:

“No one is good enough for me.”

“I deserve special treatment and privileges.”

“The world would be a better place if [insert group of people] weren’t on it.”

In short, they are any beliefs that make you feel superior to others.

It’s worth noting that not every one of these beliefs is a direct internalization of a parental message. Sometimes, we will rebel against the message and adopt the opposite belief. For example, parents may be so abusive that an adolescent thickens their skin and decides to become practically invulnerable, so nothing hurtful can get through.

So instead of the belief being that “people I love will hurt me,” it’s covered up and subsumed by the belief that “no one can hurt me.”

But no matter what these exact beliefs may be, every one of them is clearly false because, let’s face it, we are all equal and we are all enough, just as we are. Even if we make mistakes or do bad things, or we do good things and achieve massive success, it doesn’t mean that we are any worse or better as a human being than anyone else.

The real tragedy of life is that people don’t get to enjoy it because they continue to misinterpret situations and think they’ve found more evidence to support the false conclusions they formed in childhood.

The real tragedy of life is that most people don’t get to enjoy it.

So let’s talk about solutions.

First, you need to recognize your own shit. A great way to do this is to think of the last emotionally charged situation you were in, where your reaction was out of proportion to what actually happened, and try to identify the belief that led to that reaction.

Here’s a common example: Why are so many men who email me afraid to approach women? If you start talking to a stranger, in most cases, the very worst that could happen is that they won’t want to talk to you.

But if you combine this with the belief, “I am not enough,” then every time someone doesn’t want to talk to you, it’s not just someone who’s respecting their time and being honest with you—it’s yet another confirmation of a painful, deep-seated belief. It’s an old nerve being pressed. It’s someone being better than you—and you being a piece of shit who’s not even worth their time. And likely, in childhood, that’s a message you may have unconsciously gotten from mom or dad.

So if, instead of putting the shit in your bag and adding to your burden, you can stop, sniff it, see that it smells crap, and figure out whose asshole it came from—hint: it wasn’t yours—then you’re on your way to lightening your mental load.

But recognizing it is not enough. The next step is to disprove it. This can be done through positive self-talk, through noticing all the times when the belief is not true, or through facing your fears. But there’s another, much easier method:

“See as much as you can in your life like a child, or an artist, does: As if you’re experiencing it for the first time.”

If the only thing keeping you from enjoying your life is the past, then a simple solution to put into place right now is to start living in the present.

See as much as you can in your life like a child, or an artist, does: As if you’re experiencing it for the first time.

And you will find that not only will that bag of shit disappear, but now that you’re not carrying it around, stinking up the room wherever you go, people are going to enjoy being around you a lot more.

Because the most annoying thing about that big bag of shit is that it’s a self-fulfilling prophecy. When you stink, people don’t like being near you. So let go of the past—let go of the lies you’re so invested in, let go of the tired stories you tell yourself, let go of the internalized parent who’s so busy judging you and others—and you’ll find that the world is a lot bigger and brighter and easier to navigate than it used to seem.

You may even find that all the things you’ve been working so hard for start to come to you. And the funny thing will be: You won’t really want them anymore. Because you have you. And that’s all you need.

See as much as you can in your life like a child: As if you’re experiencing it for the first time.

Thoughts on this article? Join the discussion below. Know somebody who needs help emptying their Big Bag of Shit? Share this article with a friend in need.