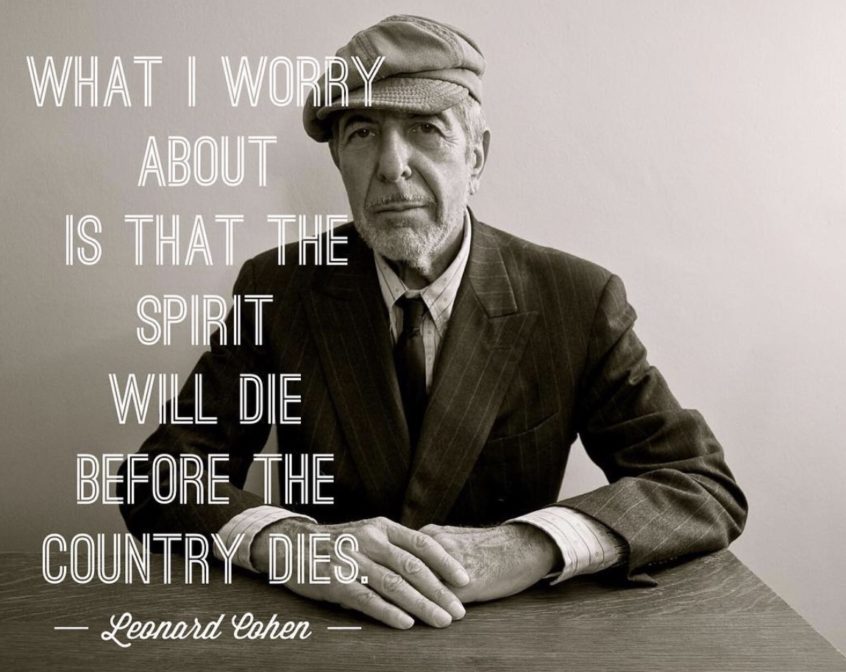 Some eight years ago, a friend brought me to meet Leonard Cohen.

“A writer named Neil Strauss is coming over,” he told him.

I was in awe: Cohen was, and remains, one of my favorite musicians, songwriters, and poets of all time. The beauty and eloquence of his lyrics are part of what inspired me to become a writer, and one of the standards to which I measure myself and constantly fall short.

And so I was more than excited for the visit to Cohen’s humble Los Angeles home, especially since I was working at the time on a book called Emergency, which many of you have read. It was chiefly about my concern for where this country was heading, and how to best keep ourselves and our loved ones safe in uncertain times.

This week, two major things happened: The most vituperative, fear-mongering election in recent memory came to an end, leaving many feeling uncertain—whether fearful or hopeful—about the next four years. And two days later, Leonard Cohen passed away at the age of 82.

“What I worry about,” he said when I visited him, “is that the spirit will die before the country dies.”

And so in tribute to Cohen, and in light of current events, I wanted to share some of his insights from that meeting, many of which can be found in Emergency. I will leave my personal politics out of this, but they’re available in that book and in my recent Rolling Stone articles for anyone to find.

Cohen had just been watching documentaries online, and saw the system as breaking down from too much strain.

He elaborated: “There are forces of evil in this world that are too great. And they will push forward, no matter how many protests there are. Just like in Iraq, the war was an inevitability. Even with people protesting it all over the world, it was going to happen.”

They were words that weren’t pleasant to hear: I prefer to think that all it takes is one person to create a change.

He took an unhurried sip of mushroom tea, and responded with a phrase that became one of the themes in Emergency: “You become what you resist.”

We spoke about what it takes to survive uncertain times, and this timid man in his seventies was clear on the answer: Strength.

We soon shifted from politics to one of his other favorite topics: women. “I can’t live with a woman, I’m sure you can relate,” he told me.

With perhaps an inkling of The Truth already in mind, I told him that maybe our relationship problems came from the way we were raised. He was skeptical about that.

“I’ve never had a good relationship,” he lamented, “I’ve only had bad relationships.” He paused, then reconsidered: “I guess the only common factor in all of them has been me.”

We discussed it a little more, especially the idea of being able to change oneself, and eventually he spoke a sentence that has been one of the guiding forces in my life. I’d just never been able to put it in words as eloquently as he did:

“The improvement of the soul is a lifetime project,” he said.

He then paid me what may be the kindest compliment anyone’s ever said: “You’d make a great father.”

I was planning to visit him again this year, and now it’s too late. I wish we could have continued this conversation, especially about relationships and politics today.

So I am left instead thinking about one particular scene that day that’s been playing on a loop in my head since I heard about his passing.

He was discussing a book he’d read on Auschwitz. Some scholars, he explained, wondered why the Jews didn’t rush forward and try to overpower the handful of machine gunners about to shoot them when they were being led to mass graves.

According to the book he was reading, the answer was: “It’s because that’s not what they wanted to do. They wanted to reflect on their life and prepare to die.” He paused and slowly picked up his teacup. “And that’s what I’m doing. Preparing to die.”

“How does one prepare for that?” I asked.

He never answered that question. But unlike many who live in denial of death, he has had some eight years since to prepare. Some of this preparation includes his last album You Want It Darker, released just weeks ago, in which he sings: “I’m out of the game…I’m ready, my Lord.”

And so I wonder: When our time comes, how many of us will also have the good fortune to be ready?

If the improvement of the soul is indeed a lifetime project, then there are few souls that have been as thoughtfully, lovingly, and painstakingly polished as Cohen’s.

RIP to one of the greatest artists, poets, visionaries, and souls of our time.