In the Playboy Mansion in Los Angeles, Hugh Hefner, age seventy-two, sat in the library in his second skin: a red smoking jacket and black silk pajamas. On the table in front of him were a bottle of Diet Pepsi and a plate of cookies, accessories that replaced his pipe after his 1985 stroke. He spent most of the interview discussing a lifestyle concept he had recently come up with, thanks in part to his introduction to Viagra: having multiple live-in girlfriends simultaneously, an idea that would later get him a reality show. His first batch consisted of former Baywatch actress Brande Roderick, and twins from Chicago named Sandy and Mandy—while, simultaneously, his wife Kimberley Conrad, who he’d separated from several months earlier, was living in an adjacent house on the property.

How would you feel if Kimberley started dating twin brothers?
Hefner: We’ll cross that bridge when we get there. But, actually, I think the fact that I am seeing three ladies rather than one probably does make it easier for her. If I were seeing only one person continually, then it would be a much closer comparison to the marriage, and that would be, by its nature, more difficult.

Would any of this be possible without Viagra?
Hefner: Well, I think it would be very difficult without Viagra. I think they’re underselling Viagra, because it’s more than an impotence drug. It’s a recreational drug. It eliminates the boundaries between expectation and reality. It permits a level of pleasure that is otherwise just something you hope for. I think it’s as important in its own way as the birth control pill. It’s being tested now on women, because there is some indication that with them it may have some similar effects. [. . .]

What about plastic surgery? Do you think people have taken it too far?
Hefner: I think it’s like medicine. Anything that makes you feel better about yourself is perfectly appropriate. Why should one be required to stay in a box that was handed to them by either nature or by their parents or peers? Why not create yourself? Why not be the person you want to be?

A lot of people in our culture today are self-invented celebrities, but you were one of the first to do that.
Hefner: I don’t know if I was the first, but it’s certainly very dramatic in my case. I think that, you know, there is a light that is handed to you by your parents and society, and then there is a light that if you are smart, you can create for yourself. In other words, Bernie Schwartz reinvented himself as Tony Curtis. Archie Leach reinvented himself as Cary Grant. They had obviously made films, and the films were enough to help them, but I think that in another way we all try to do that, if we’re smart. And I certainly did.

When did that process begin for you?
Hefner: My first reinvention was when I was in high school. Having been rejected by a girl I had a crush on, I literally changed the way I dressed and went for what I perceived then as being cooler clothes: yellow cords and saddle shoes. And I changed my name: I started referring to myself as Hef for the first time.

I wonder how much rejection drives people to become stars.
Hefner: Or repression. I think that without question, you know, rejection may be a part of it, but primarily it comes even earlier than that.

So for you, it came from being raised in a home without affection?
Hefner: Yes, although there was a point in time that my mom said she was really sorry, and that she herself had been raised in a very oppressive home, so she had been unable to show that affection. And I said to her, “Mom, anything that you may have done that was less than ideal was a blessing. It motivated me to create the world that I have created and accomplish what I have accomplished.”

So sometimes it’s the sand in the oyster that creates the pearl. You need some irritation. You need some repression or some conflict. And my life would have been much less satisfying if I didn’t have that.

Do you think you’ve reinvented yourself again now?
Hefner: Well, to some extent. But what I’m doing is I am revisiting, you know, the guy I was before. And with a vengeance. 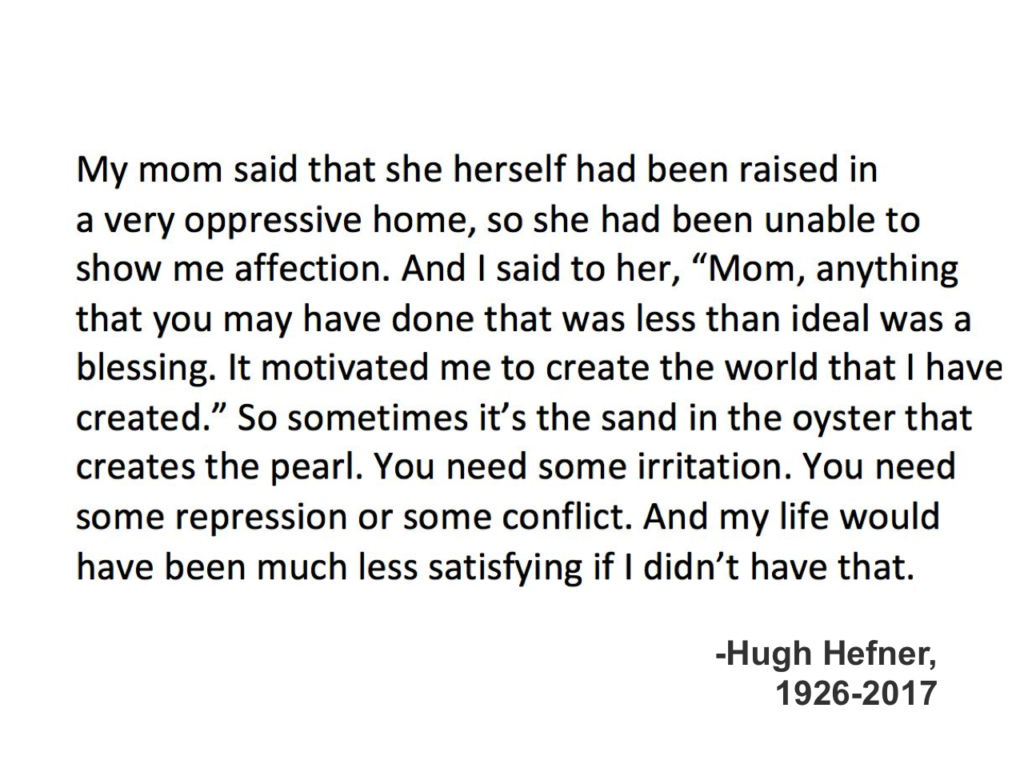