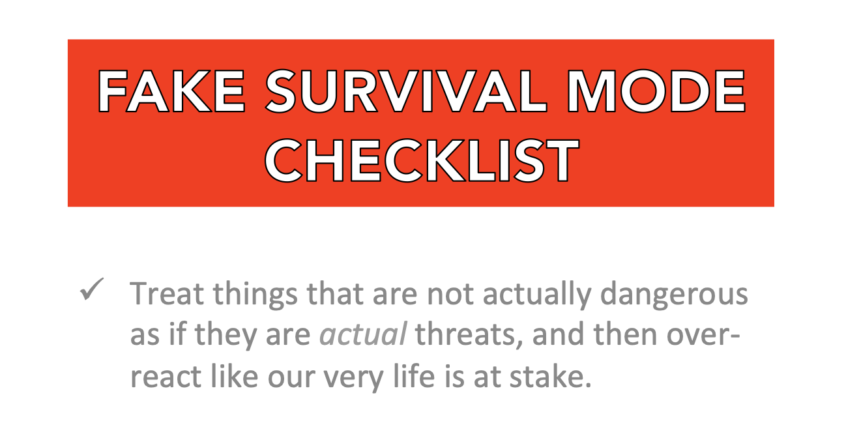 In order to survive, we need:

If you’re reading this, I’m guessing that this year, and in the near future, the first four survival needs are not ever going to be a concern.

As for safety, if you live in the United States, your chances of dying due to violence or injury is .07 percent. Though actually, the figure is much lower if you’re not either very old (and prone to falling-related injuries) or addicted to prescription/hard drugs.

What I’m saying is: When it comes to your basic survival needs getting met, you’re doing just fine. You’re reading this blog post. Life is good.

Yet one of the big themes that came up among attendees of the second ever H.A.V.E. last month is that most people go into…fake survival mode.

We treat things that are not actually dangerous as if they are actual threats, and then over-react like our very life is at stake.

Fake survival: treating things that are not actually dangerous as if they are actual threats, and then over-react like our very life is at stake.

For example: Some people fly into a rage when they feel like someone is trying to control them. Others shut down or even storm out of the room when they feel that someone is criticizing or negatively evaluating them. Or if their ego gets poked in some other way.

Most people have a specific button, unique to them, and once it is pressed, the body goes into fight or flight mode. They can even feel their heart rate increase, their muscles tense, their vision narrow, and the rest of the world disappear as if a rattlesnake just appeared in their path.

And these buttons – your buttons – exist because in childhood, almost everything is potentially a survival threat.

We are so dependent as newborns, and so in the moment, that any time a caregiver doesn’t meet our needs, it can feel like the end of our world. Imagine lying on your back in bed, unable to move and hungry. And no matter how much you scream, no one comes.

That is a legitimate survival fear.

Because abandonment as a child does mean death. Abandonment as a healthy adult, however, typically means that someone toxic is out of your life and that’s a good thing.

But some people respond to abandonment like their world is ending…a few even take their own life.

And this is partly because in childhood, our survival responses get wired into our brains, and remain there…even when we become self-sufficient and independent.

And as a result, we treat a lot of things like safety threats that are just actually discomforts. Or experiences of other people expressing their free will, and acting in ways that we can’t manage or control.

Imagine you live in a city in medieval times, and you build a wall around it to protect it from foreign invaders.

Now imagine that centuries have passed, and the invading tribes are all gone and it’s safe now.

Yet you still live inside the city with the wall still up.

That is the way most of us go through life, especially in close relationships.

And the only way to get out of this fake survival mode is to correct the lie:

To realize that the things we are most afraid of, whether it’s failure…

or not being liked…

or being unmasked as unworthy…

or asking for our needs to get met…

or a horde of other things…

will not kill us.

In fact, they probably won’t even harm us.

Meanwhile, our fear and anxiety about them turn them into self-fulfilling prophecies.

It’s ironic that the most dangerous thing we do with our lives is actually being in fake survival mode. Find out what it is here:

It’s a danger to living your authentic life.

It’s a sure way to be on your death bed, realizing that you never got to live.

And if that’s not actually dangerous, it’s at least very tragic.

So I wanted to write and just make sure you all understood this concept. Especially as, in this year of Archimedes Lever, we come up against ourselves, our fears, our buttons.

Stay out of fake survival mode, and the world will seem a lot brighter and full of opportunity, possibility, and interesting people.

And you will like your own company a whole lot more.