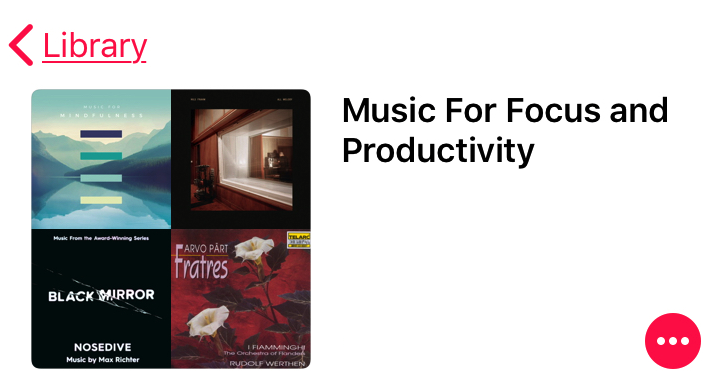 Every day, there’s something new and sinister that robs me of my focus and productivity.

I’ve written about this before and offered my advice on how to stop distractions dead in their tracks.

…but they keep on coming back.

So one tool that I use to be laser-focused and productive while I write is playing a handful of songs and artists on repeat.

I’m sharing this because this past month at The Society Intensive, I was asked about what music keeps me focused and productive. It was one of the many moments of the weekend when EVERYONE in the convention hall scribbled a note.

The benefits are well-documented:

In his 2016 magnum opus Tools of Titans, my friend (and enemy) Tim Ferriss wrote that one of the common habits of hyper-productive people is that they listen to the same song on repeat.

Playing music on repeat helps to maintain focus and tune out the frivolous distractions clamoring for our attention.

Be sure to check these out on Pandora, Spotify, SoundCloud, Apple Music, YouTube, Amazon, and if they still exist near you, a record store.

While my choices of productivity music change on a monthly basis, below is the music that I have been writing to lately.

Let me know in the comments what you’ve been listening to for focus and productivity.

Max Richter: Get the album Sleep and listen to it while you sleep—it’s 8.5 hours long. (Sleep hygiene is a form of productivity and focus.) (Listen)

Low:  The Great Destroyer or the Invisible Way, though the song “Clarence White” has to be skipped halfway through. (Listen)

Ratatat: When on a tight deadline and caffeinated up. (Listen)

“Ultimate Study Playlist I” found on 8tracks:  This is a mix of classical piano compositions and melodic cinema soundtracks that I use when writing my screenplays. I find it helps my mind weave into dramatic story ideas as the music is constantly changing tone and emotion–yet it remains soft enough to not break a focus zone. (Listen)

“Alone in Kyoto” by Air (Listen)

Any song by the artist Kygo (Listen)

Starting at age 11, I did my math homework while listening to film scores. Twenty two years later, I still do my best writing, brainstorming, and goal-setting to the sounds of movies. My favorites include:

Legends of the Fall, original score by James Horner (Listen)

Lately, I have been listening to YouTube playlists of piano covers to hard rock and metal songs.

My favorite by far is Viktoriya Yermolyeva who does beautiful piano covers of Alice Cooper, Metallica, Tool, System of a Down, and other hard rockers.

You can find the playlists on her YouTube channel, vkgoeswild: (Listen)

Again, let us know in the comments below what you’ve been listening to for focus and productivity.