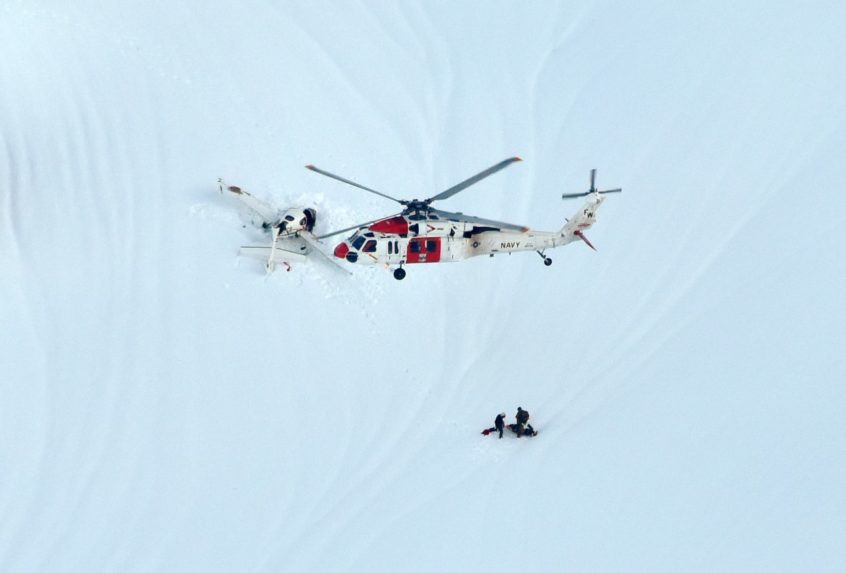 Today, I’m sharing a very personal story with you.

It’s about death as a teacher of life wisdom.

It’s also about how a simple compliment someone received years ago ended up saving his life last month.

Specifically, it’s about a miraculous near-death experience that was recently in the news, and involved a friend and Society member, Mike.

You may have read about a plane that crashed into Mount Jupiter outside Seattle.

Mike was one of the survivors. In fact, he was learning to fly. This lesson didn’t go so well.

He is a leading eye doctor and father of three beautiful children. He spends lots of time doing charity surgeries in impoverished villages around the world.

Mike shared his story with Society members, and discussed the life-changing epiphany he experienced after this near-death experience.

It was so interesting and sincere that I reached out and asked if I could send his insights to you.

So without further ado…

How accepting a compliment years ago helped one man survive a plane crash.

I was in a plane crash.

At least, that’s what I am told.

My brain has done a trauma-blocking Jedi mind trick and perfectly edited out any memory of my time in the cockpit.

Being in a plane crash is quite the experience, and crashing into a remote mountainside makes it that much more interesting.

I’ve experienced strong emotions after going through a near-death experience, and the isolation of surviving, while being a father of three — and while in the midst of a big shift in my career.

I’ve also had a number of epiphanies and learning experiences from having to deal with significant injuries that have left me (temporarily) bedridden.

There is one specific epiphany that was most surprising to me and has had the most impact on my life. It also happens to be one that, if I can express it correctly, could provide value to the group here.

This epiphany came 4 days after the crash.

I had gone through 3 surgeries up to that point and had just been released from the ICU.

As result of the epiphany, my mindset shifted from that of a survivor to that of a living/thriving being.

The epiphany is in regards to worthiness.

While I was full of gratitude and thankful that I survived the crash, relatively soon after the crash I became riddled with guilt.

Guilt that I was putting my family through such an ordeal.

Guilt that it took a ridiculous amount of humanpower (4 staff members) just to roll me and allow me to have a bowel movement on a bed pan.

Guilt in regards to the impact it would have on my work and employees.

Don’t let guilt compromise your sense of worthiness about yourself.

Finally, and most importantly, guilt that I was burdening so many people with having to send thoughts, prayers, and visits my way.

The outpouring of support was amazing and humbling, but I felt undeserving.

It was not survivor’s guilt. I felt deserving and appreciative of life, but guilt that I was such a “burden” on everyone.

The tipping point came when I received a text message from someone who had been a mentor and I had great respect for. He was an attending physician during my medical residency.

He sent a simple message expressing his support with an offer to reach out to him if I needed anything at all.

Initially this caused a spike in guilt.

Given how much I respected this person, his support seemed especially valuable and who was I to deserve such an abundance of good karma?

Then I experienced a subtle shift.

It was the first message I received outside of my immediate network and Society brothers. He and I are not in close contact and I don’t know how he even heard of the accident, let alone had my contact information.

The message was sent on his own volition and was an act of pure kindness/love.

That was it. It was subtle but I came to the realization that it was okay to accept all the love and support that was coming my way.

Worthy of the ridiculous amount of nursing attention I needed.

Worthy of all the thoughts, prayers, visits, time, and energy.

Worthy of being cared about and cared for.

It’s odd: If one of my friends had been in my position, I would have visited them and supported them without a problem. So why was I thinking that I was a burden to others?

I realized that it was okay to accept all that good energy, that I deserved it even though I’d been a “victim” (and hadn’t accomplished anything).

I’d been so strong and independent all my life. I was the one who took care of other people’s problems. I was always more comfortable with giving than receiving.

But from this experience, I learned that it was okay for me to have physical and emotional needs as well and to accept help from others.

I no longer needed to hide my needs behind the lonely wall of “I got this.”

This insight also came with the knowledge that this gift of support wasn’t a one-way street. It’s a circle. Other people were paying it forward to me, and I was going to have the opportunity to pay it forward as well.

And the only way to do that was to get busy living rather than just surviving and feeling like a victim, or feeling undeserving.

After experiencing near-death, paying it forward is getting busy LIVING, not feeling like a victim.

By showing up and living in alignment with my principles, I could eventually recycle all that karma I had received and send it back into the universe to be absorbed by other deserving souls.

Because we are all deserving: Not just others and not just us – but everyone.

The mind loves making connections, and to look for signs of fate and serendipity.

After the accident I found myself doing this a lot. One day, I had an epic 24-hour nonstop battle with my ego.

Eventually, I was able to wrestle my ego back and discard many of the false thoughts, but the following feels genuine and relates back to my discussion on worthiness.

I have shied away from compliments my whole life.

But there is one compliment I was given many years ago that I allowed myself to accept.

It simply was that I look good in red. That is it. Ever since that compliment, my otherwise overly bland wardrobe has always had a healthy dose of red in it.

So on the day of the accident, I was wearing a red shirt.

When you crash an airplane near the peak of a cold, snow-covered mountain, the logical thing to do is to remain in the cockpit as you wait for help.

I have no memory of how or why I did this, but for whatever reason I decided to exit the cockpit.

To do this, I had to maneuver over the instructor pilot as my door was completely blocked by snow.

I opened his door, climbed out, and shimmied over the wing of the plane.

This occurred while having a destroyed left leg and with multiple spine fractures.

Given that the angle of the terrain was about 45 degrees, I then had to splay myself out like a 6’4” starfish to keep myself from sliding down the mountain.

This gangly starfish wearing a red shirt is what the search and rescue crew was able to spot from the air, like a giant human distress signal. Otherwise they never would have seen the white airplane crashed into the white snow-y backdrop.

So accepting that compliment years ago saved my life.

Maybe it was a coincidence. Maybe it was meant to be. Maybe those words were intended by the universe to plant the seed that saved my life and kept me from freezing to death out there.

Open your eyes, open your heart, clear your mind…What you pay attention to is your reality.

But whatever the case, it’s interesting that the message is the same as my other epiphany: Acceptance.

And specifically, accepting and feeling worthy of the positivity that comes your way.

It sounds so simple, but for many like me, it’s hard to do. There are many people who will respond to a compliment by putting themselves down – in order to be “humble,” for example.

I remember Neil telling me that when people used to compliment him in the past, his posture would start slouching, as if to tell him that he was small and didn’t deserve it.

So you can choose right now, and save yourself the trouble of crashing a plane into the side of a mountain (or years of self-help), to decide that you are worthy.

You are worthy of any compliments that come your way, of the good things that happen to you, of the love and caring in your life. You can not only accept it, but take a moment to breath it in and revel in it.

And then go put into the universe 10 times the good energy that you are currently receiving.

Most of all, don’t feel guilty about anything positive in your life. You are not going to turn into a cocky douchebag by accepting the good vibes.

After my experience, I can tell you the universe doesn’t work like that. You will remain humble, you will experience a shift, and in the end you will be able to release even more good energy into the universe than you are accepting.

It just may save your life one day!

Don’t feel guilty about positivity in your life. Accepting the good vibes doesn’t make you a dbag.

Let Mike’s story serve as a reminder that you’re worth the best that this life has to offer.

So many people receive positive feedback and experiences every day, but they ignore it or dismiss it. Instead, they dwell and obsess on the negative – and the ticker-tape of bullshit running through their minds that disconnects them from others.

So open your eyes, open your heart, clear your mind, and take in the positive results that you’ve created for yourself. What you pay attention to is your reality!

And Mike, a last thought for you: Receiving with appreciation IS giving.

Receiving with appreciation IS giving. Taking compliments with grace can save your life.