I am seriously upset at him.

He used to be my brother in slow, agonizing book turn-around times.

We’d sweat together for years on the research, writing, and editing of our books, vowing never to do it again when we were done.

But now, all of a sudden, this guy has turned on me.

He called one day and said: “I want to write a book quickly. It will be just as good as the other ones, if not better, but without taking years off my life.”

We discussed it, as I’m sure he did with every other writer friend because he’s a master information-extractor. And then he had the nerve to go ahead and DO it. In three months from that time, Tools of Titans went from an idea to a completed book. What a great title, by the way.

And the jerk wrote it in Paris. That doesn’t sound like suffering at all.

But wait, it gets worse: A year after that book hit #1, his next book is already coming out. In that time, all I did was pretty much sit around, scratch my ass, and try to think of a title for my next book.

Anyway, Tim’s next book is called Tribe of Mentors: Short Life Advice from the Best in the World.

I am honored to be one of the “best in the world,” despite still being so slow with my book turn-around times.

So I wanted to share something really cool with you just as Tribe of Mentors is hitting bookshelves this week….

One question that Tim asks the guests on his amazing podcast is, “What is the book (or books) you’ve given most as a gift, and why? Or what are one to three books that have greatly influenced your life?”

So here, with Tim’s permission, is a sneak peek of some of the books that were mentioned most often by Tim’s guests and why they recommend them.

The Champion’s Mind: How Champions Think, Train, and Thrive by Jim Afremow

[After failing to qualify for the CrossFit games, this book] got me focusing on giving my absolute best in any given situation without the pressure of constantly stacking myself up to others.

It describes how to make good decisions in any situation with a relatively limited mental toolkit: the big, enduring ideas of the fundamental academic disciplines. Virtually everyone is exposed to these concepts by high school, but few people truly master them or apply them in everyday life.

Ancient Taoist wisdom applicable to anything. It can be read at different times in your life and every time it’s revisited, it takes on entirely new meanings. The wisdom in it is timeless: how to be a good leader, a good person, a good parent, a good artist—how to be good at anything. It’s a beautiful read that awakens aspects of the brain in a really nice way.

His descriptions of life in Nazi death camps, while everyone he loved around him perished, had a lasting impact on me and especially on how I decide what I want to spend my time on. [From it] I interpreted that we cannot avoid suffering, but we can choose how to cope with it, and that having meaning in our life is essential.

The Fountainhead by Ayn Rand

I got sucked into reading this over-the-top manifesto of self-reliance during finals of my first year of college. By the end of the book, I decided to drop out of school. I never returned. It was the best decision of my life.

The Alchemist by Paulo Coelho

I spent an inspiring evening with Paulo in Switzerland, around the time we were launching Spotify in Brazil. It was fascinating to talk to him about how this book came to be such a hit—he never backed down, and he allowed people to read it for free in order to boost sales —much like [what we ended up doing with] Spotify in the early days.

That’s just the tip of the iceberg. Other things he asks this huge tribe of mentors about include how they say no; new and affordable products that have changed their lives; failures they learned from; and other questions that you can absorb and apply instantly.

So if you want to keep learning from the best, get your copy of Tim’s new book Tribe of Mentors.

P.S. I don’t think anyone else in the book mentioned the readings I recommended. One of them is worth a blog post in itself: Under Saturn’s Shadow by James Hollis.

I’ve sent it as a gift to many friends and Society members. And it’s especially relevant today. It’s a deep inner game book for men, written from a Jungian psychoanalyst (the same one quoted in The Truth).

P.P.S. You can read all these recommendations plus Tim’s book for free at a local library. Call to put a copy on hold. If you’re lucky, you may even end up calling the library where my brother works.

P.P.P.S. I wrote in Everyone Loves You When You’re Dead that often when people say they “hate someone,” they either see a part of themselves in the person they hate…or they’re secretly envious.

I’d like to clarify that this is not the case here.

Tim is really a bad person. He should stop doing so much awesome stuff that profoundly helps and influences people to become better. 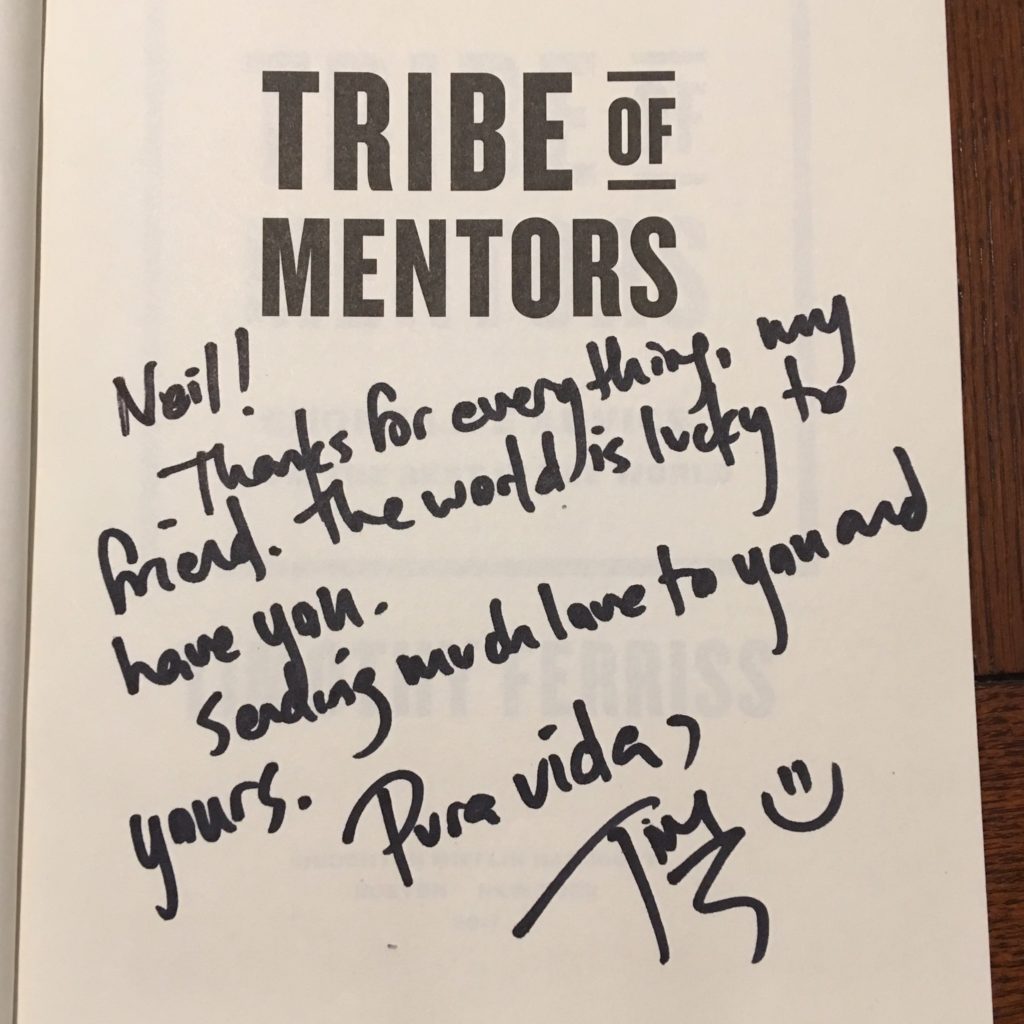