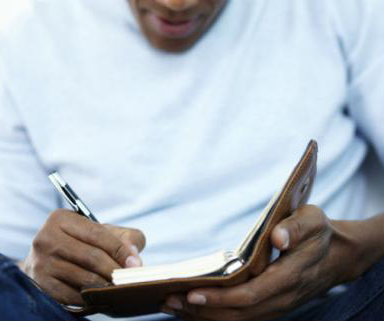 , increase your level of life satisfaction, and keep you alive longer. But don’t take my word for it. Just do a quick search on Google Scholar for “mental health benefits of journaling” and check out any of the 9,000+ scholarly articles that have been written on the subject.

Below I’ve summarized three of the overarching themes to come out of this line of research that hit home with me:

1. Journaling allows you to construct a meaningful narrative out of the thoughts, emotions, and experiences that bombard you on a daily basis.

Why is it important to construct a meaningful narrative out of your experiences? Because as human beings we are “meaning-making machines.” Our default is to look for meaning in everything we encounter. Why did she look at me that way? What did my boss mean when he said that? And so on and so forth, with absolutely everything.

When we have an experience that doesn’t fit

into a meaningful narrative, the result is often trauma. When we neglect to give meaning and context to the normal events of our lives, the result is a cluttered and stale mind. Imagine a garden filled with weeds, with no room for anything fresh to grow.

Just think about the symptoms of Post Traumatic Stress

Disorder: hyperarousal, uncontrollable startle response, unwanted flashbacks, an inability to revisit the event because of an overwhelming fear/anxiety response. People who develop PTSD have had a reality shattering experience that doesn’t fit into the existing narrative of their lives. It’s no coincidence that both combat veterans and people who have “bad trips” on hallucinogens experience flashbacks. Both experiences shatter one’s normal experience of reality, and therefore remain detached from the existing life narrative. Such events often get expressed as unwanted and uncontrollable flashbacks.

It is also no coincidence that the treatment for PTSD revolves around getting the person to re-experience the traumatic event and accept it as a part of their life narrative. When context and meaning are given to traumatic events, they often cease producing negative symptoms. When context and meaning are given to the normal events in our lives, we clear out the weeds and prepare a fertile space for fresh ideas to sprout. Which brings me to point number 2.

I recently started the 30-day Stylelife Challenge. But instead of doing it alone, I asked a friend to hold my feet to the fire and make sure I do something each and every day, and most importantly, write up what I learned at the end of each day. My friend chose his own goal, to which I keep him accountable, and together, for the past 26 days, we’ve been each others’ “accountability wingmen.”

Every day we send each other emails about what we did to achieve the goals we set out for ourselves. In addition to simply listing out what we do each day, we end our emails with a “takeaway” section where we give a bigger picture analysis of where we are, what we’ve learned, and the realizations we are making along the way.

For example, a week ago I had the following realization that has already helped my game:

In the same way that we can use random questions that come to mind as openers instead of relying on Google, we can use our successes/positive moods as fodder for what to say after the opener starts to fizzle, instead of relying solely on friends or family. By celebrating your successes, joys and positive feelings about the day with a girl you just opened, it gives you more to talk about, but more importantly allows you to radiate authentic positive energy. Before going out next time, think of one thing that you are really looking forward to or are excited about, and make it a point to share that with everyone you interact with. It might seem forced at first, but you will soon realize how contagious positive energy can be.

3. Journaling has the power to uproot and change deep-seated beliefs about yourself.

Influence: The Psychology of Persuasion, Dr. Robert Cialdini writes about some of the psychological persuasion tactics employed by so called “compliance professionals.” In one case study, Cialdini describes how American prisoners of war (captured during the Korean war and held in Chinese-run POW camps) were influenced to defect from the United States and inform on one another. American psychologists

interviewed the returning POWs because of the alarming success of the Chinese persuasion program.

“…prisoners were frequently asked to make statements so mildly anti-American or pro-Communist as to seem inconsequential (“The United States is not perfect.” “In a Communist country, unemployment

is not a problem.”). But once these minor requests were complied with, the men found themselves pushed to submit to related yet more substantive requests. A man who had just agreed with his Chinese interrogator that the United States is not perfect might then be asked to indicate some of the ways in which he thought this was the case. Once he had so explained himself, he might be asked to make a list of these “problems with America” and to sign his name to it. Later he might be asked to read his list in a discussion group with other prisoners. “After all, it’s what you really believe, isn’t it?” Still later he might be asked to write an essay expanding on his list and discussing these problems in greater detail.”

Using subtle techniques such as “directed journaling,” Chinese compliance professionals were able to change American POWs’ internal beliefs about the supremacy of capitalism and democracy so thoroughly (beliefs that these men were willing to die for), that they refused to be repatriated to the U.S. after the war was over.

If such techniques can so effectively be used to dismantle and rearrange long-held, deeply rooted political beliefs in a war-time context, why shouldn’t they be just as effective at dismantling and rearranging deep-seated limiting beliefs in a personal growth context? Using directed journaling to offer alternate interpretations to the automatic, limiting beliefs you carry around is a powerful way to change how you feel about yourself and your outlook on any situation.

the following exercise to rearrange your beliefs so that they serve you:

When encountering an adversity (say, for example, your girlfriend dumped you and you didn’t want the relationship to end), write down several alternate reasons for why she broke up with you. These should all be reasons that boost your confidence. The more outrageous you make them the better:

She was so obsessed with me that she couldn’t focus on her own life.
She had an inferiority complex and didn’t feel comfortable in the relationship anymore.
And so on. (Notice the similarity here with the exercise in which the American POW’s were forced to write a list of all the “problems with America”).

After you have your list, read it every night for a week and notice how your feelings and outlook start to change. Use this for any adversity you encounter or any limiting belief that you would like to dismantle. Once you realize that you can be your own “compliance professional,” the possibilities for making your beliefs work for you are truly limitless.

If you’d like more from Roger, you can find him here: www.hodgepodgerog.com