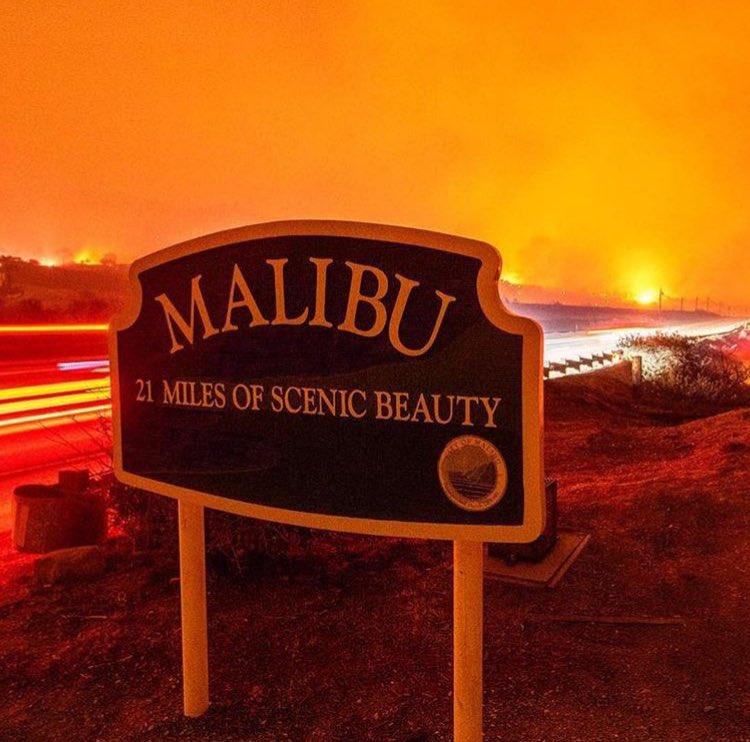 These past few days have been an emotional roller-coaster—with one of my biggest life lessons at the lowest point of the ride.

This blog post is as much for you as it is for me, so that I can remember and internalize the epiphany of this week. Some of you may not even relate to it. But it’s an interesting story nonetheless…

On Thursday, I traveled to Bhutan, a mountainous Buddhist country in the Himalayas, with a small delegation led by Dr. Kimchi Moyer to learn more about the idea of Gross National Happiness—and become designated happiness emissaries by HRH Princess Kesang Choden.

On the second evening of the trip, as I was camping deep in the Punahka valley, I discovered that wildfires were spreading from Simi Valley in Los Angeles—and had just jumped the 101 Freeway. They were on their way to my home in Malibu. Evacuations were ordered.

My family—Ingrid, Tenn, our two dogs, our bird—quickly piled into a car, taking nothing from the home with them. Ingrid’s hands were full handling just this small menagerie.

It took her five hours to make it to Santa Monica, sitting in wall to wall traffic on the Pacific Coast Highway, under smoke-filled skies with fierce flames climbing over the hills and heading towards the road.

I stayed up all night, standing in the darkness of the campsite, getting the latest reports from her, from neighbors, from my assistant Charlene, and from the news. Watching helplessly as the raging fires drew ever closer to my neighborhood, which residents thought was mostly immune from wildfires due to the barrier formed by the Pacific Coast Highway.

Of course, from writing Emergency, I knew what to do to protect a home from a wildfire. I had Thermo-Gel in the garage. All I had to do was spray it on the home to protect it. I’d even bought some as a gift for several of my neighbors.

But I was in Bhutan, Ingrid had already fled the house, and the route to our home was now closed by the authorities.

There’s preparation and then there’s opportunity, and the opportunity to protect my house was gone. There was no one to spray this protective barrier on my house.

Soon I learned that the fires had jumped the Pacific Coast Highway. I watched a news report describing this catastrophe, and as the cameras turned to show the other side of the road, I saw flames everywhere in the area of my street and home.

My body went cold and the blood rushed to my core. I felt dizzy, my chest tingled, and my face swelled red with tears. I thought of not just my home, but those of my neighbors and friends back there. People I love and trust who bring such happiness into my life. My family of choice.

Thoughts on helplessly watching your community burn to the ground…

Charlene gave me reports from Nextdoor and neighborhood forums. It looked like my street was going up in flames. I made a mental survey of the items in my home. My clothes—I could always get new ones. Same with my furniture. And my toiletries.

The hundreds of books I’d read and scrupulously underlined , my platinum album presented to me by Nirvana, my framed hate mail from Phil Collins, recordings of every celebrity interview I’d done for Rolling Stone – those were irreplaceable. But I breathed through the anxiety and let go of those too.

But fuck, what about the box full of my childhood writing. And all my photographs from the pre-digital era, from my childhood on. And the comic and record collections I’d saved since I was a kid—and were probably worth quite a bit now?

I made peace with losing all that and let go too.

But then I realized that I’d brought a spare laptop to Bhutan, and my main laptop with all my data was at home along with my backup drives. I never trusted the cloud, out of concerns my account would get hacked and all my personal photos and notes and future books would get leaked and uploaded online.

So almost all my photos and writing, including entire books that had never been published yet, were gone too.

I’d lost everything now. Of course I have a backup drive kept safely outside my home, but that place was also likely burned in the fires.

I couldn’t breathe through and let go of this one. Losing a lifetime of writing. That hurt.

My next writing projects involve several tragic crimes. I’ve been investigating them with a number of people, and because I tend to trust myself more than others, I’d held on to all the documentation and evidence at my house. From journals to computers to clothing to…a car.

And now they were all gone. And we needed them still. The cases weren’t closed.

I couldn’t get to a place of acceptance on these either. Instead, I began to berate myself. It sounded something like this:

You’re such an idiot. You say you don’t trust the cloud, and now look what happened: your personal systems are all in ashes. You should have just put your backups online. The odds of it getting hacked are minuscule—you even spoke to one of the biggest cloud storage teams in the world about that. And even if it was hacked, at least you’d still have it all. Now it’s gone. Because you were so paranoid.

And you didn’t trust other people either. You told them that you’d take care of everything. Well, you took care of it alright. Now it’s all gone. It would have been smarter to just not get involved. They trusted you and now you broke their trust.

You think that you can’t trust anyone. Well, you’re just as untrustworthy as anyone else. So stupid.

This was followed by a catchy chorus of should haves. The chorus repeated itself a lot.

After a little bit, I began to think about a new core issue of mine. It’s one I’ve come to understand since dealing with my relationship and enmeshment issues in The Truth. I’ve thought of it as the next step in my self-improvement journey.

I have parents who are, each in their own way, somewhat worried and paranoid. My mother specifically always told me growing up to not trust other people: They’re out to hurt me. They’re going to take advantage of me. They are not my real friends—they are using me.

And as for the world, it’s a dangerous place, full of criminals lurking around the corner, just waiting for me to leave my house so they can rob it.

Mostly as a result of this, as an adult, I’ve felt like I need to be in control of things to feel safe. After all, the only person I know I can trust is myself. I don’t even trust the universe. It’s a dangerous place: Bad things happen, from genocides to natural disasters to cancer. It’s all lurking around the corner.

But now, my world view was shattered: Because I was untrustworthy. I’d let everyone down. Turns out I couldn’t even trust myself.

And this is when the epiphany struck. It had to do with being in Bhutan. One of the ideas central to Buddhism is impermanence. Everything will eventually go away or change or be destroyed. You will die, your work will be forgotten, the mountains will erode, the earth will be swallowed by the sun.

So of course you can’t “trust” anything, I told myself, because you’re holding people and the universe up to a standard of perfection and permanence that is impossible. Your premises are flawed. Your expectations are unrealistic.

I suddenly realized that I’d been using the wrong word. Trust wasn’t what I’d been looking for. It was permanence. And that’s not how people and the universe operate. Things get lost and damaged and destroyed. Even things you love and care about.

A lesson on trust, control, and permanence…

So instead of having this impossible standard of perfect trust and responsibility for others to live up to, what if instead I expected people and the universe—and most importantly myself—to be what they are: impermanent and perfectly imperfect.

Shit happens. And trying to maintain control so that shit doesn’t happen is not only an illusion, but a clear path to more anxiety and less happiness.

What if instead, I told myself, you lived in a place of acceptance of impermanence. You don’t have to like it when things go wrong or go away. You can even be sad about it when something doesn’t go according to plan. But you can surrender control, and you can surrender this constant disappointment in others.

Instead of expecting nothing to go wrong and everything to be perfect, expect change and surprise – and know that you’ll be able to handle whatever happens. Almost nothing that occurs is actually a problem. Only my reaction to it can be a problem.

After all, I will never know at the time whether these changes will ultimately be a good or bad thing for my journey. Even the Princess of Bhutan told me as we discussed the fires that losing all your material possessions is also a chance to start over, to start clean, to be reborn. It’s the freedom to re-create yourself, with everything you know today.

The next morning, a friend with emergency response credentials managed to reach my house to survey the damage and see if anything could be saved. She called with incredible news: My place was still standing. My computer, my drives, my research—they were all just fine.

It was a minor miracle.

So many of my friends’ and neighbors’ houses were burnt to the ground. My community was decimated. It will likely never be the same. It’s so sad. Yet somehow my house had survived.

I told my friend, in tears of relief, “I can’t believe it. I got to keep my stuff—and keep the lesson I learned from losing it all.”

It’s important to note that letting go of control and that core fundamental distrust doesn’t mean running in the opposite direction: being out of control, trusting everyone, and not giving a shit what happens. That’s just the flip side of the same coin.

It means being in moderation around control.

Instead of expecting nothing to go wrong and everything to be perfect, expect change and surprise.

So what does that look like? Flexibility. Acceptance. Empathy. Humility.

…and trusting that whatever the future has in store, even if it’s not what I want or expect, 95 percent of the things I’m worried about won’t even be a problem if they happen. So I can loosen my grip on things.

Like losing a house. Sounds horrible. But that creates an opening–a vacuum–for not just a new home somewhere else, but all kinds of new people and experiences and growth and opportunity to enter my life. It’s likely an even more powerful (and certainly faster) transformation than one I’d consciously choose.

The fires in Malibu still burn as I write this. I’m flying back to L.A. right now to help my family and my community. The wildfire is only about five percent contained, and the winds that spread the fires are picking up again. There are still flames a few dozen yards away from my home.

The threat is not over. My house is not safe. And I am not safe.

And I know that right now, in this moment, I am still here and my house is still here, so I’m going to celebrate that.

Thank you for all the emails and social media messages of concern during this devastating time for so many people, homes, businesses, and lives.