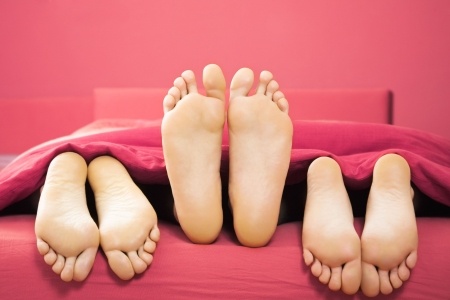 We’ve recently received a flurry of great emails from readers seeking advice about polyamory and threesomes. Below you’ll find two stories: one in the planning phase and another in an after-adventure crisis. It is not always easy to bring an additional woman into a relationship. So help these brothers out with their quality (and quantity) problems…

I come to you looking for guidance in a situation I’ve never been in before.  I have a girlfriend of about a year whom I care about deeply.  She’s bisexual, and we’ve toyed with the idea’s of threesomes (she’s not opposed, but it depends on the girl), as well as dating someone as a couple, but this is something she felt like we might encounter later down the road in our relationship.

Now, there is also another girl who I’ve had feelings for for a number of years but through various reasons and both of us not being single at the same time, it’s never really taken off. When I say feelings for this girl, I think of her daily.  It’s pretty much a one-itis.  Anyway, I’ve been having coffee occasionally with this girl because despite my feelings for her, we’re friends and I like staying in contact with her.  She mentioned to me previously that she was considering trying to date girls and so yesterday when we got together for lunch I brought up the idea to her of potentially dating my girlfriend and I.  Ideally (for me), it would become a relationship of me+my girlfriend, me+this girl, and this girl+my girlfriend.  Her initial thought was that it would be a serious thing between my girlfriend and I, and then she would be our on the side pet thing…thing. Either of those things, she is accepting of and willing to try with us.

My need for advice comes wondering how best to approach this with my girlfriend.  Should I be upfront about the fact that I have feelings for this other girl?  Should I have them actually meet in a semi-social setting before discussing it with her?

Despite my feelings for the girl, I don’t have any intentions of leaving my girlfriend.  The grass isn’t always greener and such.

I’ve been in a relationship for 16 years with my girlfriend. Two years ago, we had a wild summer of threesomes. It was fun and everything one would think it to be… except, we got attached to one of the girls and It turned into a regular thing.

I think that was my first mistake letting her choose. My connection with Candy was electric from the moment we met. Her smell was intoxicating and when our eyes locked onto one another we were drawn together. Even when I made the wrong move, with her it was the right one.

We ended up taking her from him and having a fun night of sex and debauchery. It turned out we all had a lot in common, and enjoyed more than just the sex. She became a fairly close friend with benefits for us.
Andrea fell for her pretty hard, and to be honest, I was just as sprung.  The problem came when Candy got attached to me and not Andrea. She started talking to me more and more, and getting closer and closer.

This lead to a lot of arguments and eventually a falling out between the three of us. Candy didn’t want to be the cause of it all, and decided to get a boyfriend. Boo, right? She would rather us all be friends and hang out on weekends, than to lose one of us.

So where is the problem now? Andrea has been treating the situation like I cheated on her with this Candy all summer. In her mind we didn’t fall in love with some girl, I did, and left her in the dust. Now it has been over a year of negative anger coming from her, and no matter what I do to make her feel loved it doesn’t seem to work. She feels I can and will cheat on her with any young pretty girl that talks to me.

We are still great friends and have a great sex life, but the trust isn’t there. She is so hurt over the past events that there is a never ending stream of negativity and venom directed at me daily. I guess my question is: How long should I work at repairing the situation, or is it a lost cause? What is a clear sign that we should walk away before it turns ugly?