A couple of years ago, after reading Emergency by Neil Strauss, four friends and I enrolled in a CERT Program

. It seemed like it would be a good first step on our road to preparedness and a great first step gaining practical Urban Survival Skills. 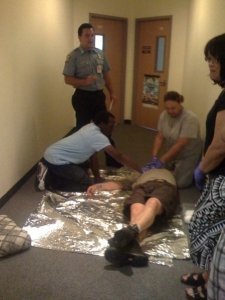 Triage – Are They Dead Yet

CERT, short for Community Emergency Response Team, is an 8 – 9 week program (four hours every Saturday or Sunday depending on what is offered

in your area) teaching people the basics of dealing with a disaster, natural or otherwise.

about disaster preparedness for hazards that may impact their area. They are trained in basic disaster response skills such as fire safety, light search and rescue, team organization, and disaster medical operations. CERT members also are encouraged to support emergency response agencies by taking a more active role in emergency preparedness projects in their community.

The information is dispensed in a classroom setting through the use of slides, a text-book provided by FEMA and DHS, and topic relevant guest speakers that are professionals in the fields of; Emergency Medical, Law Enforcement, Fire Fighting

, and Search and Rescue. These speakers provide first hand knowledge on the topics and offer real world perspectives, stories, and tips only industry experience provides. The class is typically taught in two part segments. The first half of the class is in the class room presentation. The second half of the class is hands on exercises to reinforce and further elaborate on the instruction.

How Did CERT Come About 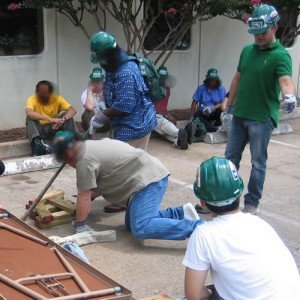 Learning To Use Cribbing

The CERT concept was originally developed by the Los Angles City Fire Department (LAFD) in 1985 and went by the name Disaster Preparedness Division. As the story goes, higher-ups in the LAFD noticed that after large Earth quakes, citizens tended to band together and attempt to render aid in a disorganized way. The LAFD decided that since their resources

were stretched so thin during major disasters, it might be very helpful to properly train citizens to render aid on a scale impossible for emergency responders to accomplish on their own.

The program became a quick success and drew national attention. Eventually the CERT concept was adopted on a Federal level and taken under the wing of DHS and FEMA.

Why Does CERT Exist

The simple answer is, because during large disasters Emergency Responders can’t do it all and be everywhere all at once.

Following a major disaster, first responders who provide fire and medical services will not be able to meet the demand for these services. Factors as number of victims, communication failures, and road blockages will prevent people from accessing emergency services they have come to expect at a moment’s notice through 911. People will have to rely on each other for help in order to meet their immediate life saving

Was It Worth It

Learning To Use Fire Extinguishers

In total, my band of merry men and myself gave up nine Saturday mornings. If you asked us today if we thought it was worth it you would get mixed reviews. I felt the information given was too limited and felt like it was a way of getting private citizens to help, but mostly keep busy and out-of-the-way during a disaster. Over all though there was a lot of useful information. For instance, I had no idea how to properly search a building for survivors or the correct placement of a fire alarm before the CERT Course. The list goes on, but you get the idea.

. In other areas, the opposite is true.

So far I have received a boat load of emails asking for CERT Volunteers to help with local marathons, an Extreme Makeover

episode, and other city events. Apparently, my city views CERT as a free labor pool for just about anything. Admittedly, I did consider volunteering for the Women’s Marathon, but figured the girlfriend would not think that was as funny as I did. 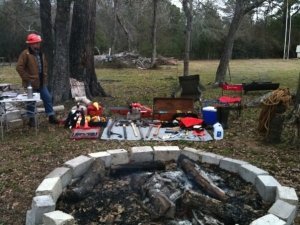 To date, I have received two offers for continuing education

. The first was a two-day intensive course on chain

saw operation and debris removal -Â which I took. The second was for a forty hour course with certification

I know my tone sounds like I am not a fan. The contrary is true; just trying not to raise people’s expectations beyond where they should be. If you have the time and inclination I would highly recommend attending a CERT Course.

Once you have completed the CERT Program

with your instructor for information and classes in your area to further your knowledge.

in the CERT program, also checkout the book What to Do When the Shit Hits the Fan.