; the Biolite Camp Stove and The Survival Stove.

Ah, the survival stove. What self-respecting survivalist, urban or otherwise, doesn’t own a lightweight portable stove. After all, when the Zombie Hordes are nipping at your heals, you don’t want to be weighed down. Survival stoves offer anyone trying to survive the Zombie Apocalypse a small convenient way to quickly cook food and be back on the move.

Lately, it seems like there have been a rash of new stove designs that do not require the use of manufactured fuels like propane or white gas. Here are two we found that might tickle your Gear Geek Bone. 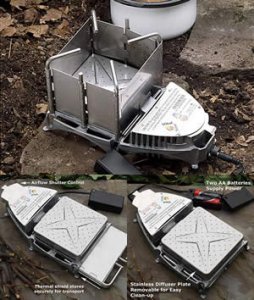 The design is pretty clever with a built-in fan that produces a lot of heat for such a small stove burning dry fuel such as wood, natural fibers, dry animal dung (for extra flavor, cardboard, charcoal, etc.

The Survival Stove is a relatively new comer to the camping stove world. Compact at just 5” x 8” x 2” (folded up) it’s not going to take up a lot of room and at 1 1/2 lb, it isn’t going to kill you with weight.

The “Survival Stove” requires two AA batteries to power the fan to reach it’s full effectiveness. While the manufacturer claims 24 hours of run time, it’s still using batteries that add weight and a dependence I would rather do without. I have enough stuff that takes batteries already. If you are just doing some light backpacking for a couple of days, it’s a neat gadget. Longer term, not such a great idea. 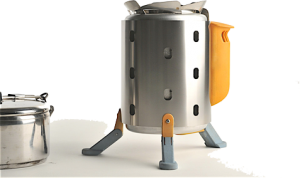 Dump the batteries and still get a forced air stove. This crazy little stove produces its own electrical power from the fire to power a fan. At just 15 ounces and measuring 7.5” x 4.75”, it’s light and compact.

One of the other interesting features of the BioLite Camp Stove is that because of it’s insulated wall, it stays cool to the touch even when a 1,400 degree fire rages inside. Besides that, the manufacturer boasts: boil times of 4 minutes for 1 liter of water, kindles

in just 2 minutes, burns basically any solid fuel lying around, and folds up for easy packing. Used properly, it even cools its self off after you are done cooking with it.

Admittedly there are instances where the advantages of a forced air stove are negated, but these are extreme conditions of cold and barren lands like the Antarctic.